Let me start this review by admitting there will be a little bias in this article.
Besides being friends with Alex, the owner of IronheartArtisans, I actually asked him to make this!

The idea for this started in late December, when prepping for a 2 day miniature painting workshop with Meg Maples (Awesome class, she was a studio painter for P3!). I was cleaning up my neglected paint desk, sorting brushes to pack a travel kit and clumsily shoved a large drybush in the coffee cup I used to hold all of my brushes and in the process I managed to inadvertently crush the ferrule of one of my Windor&NewtonSeries 7 Kolinsky Sable brushes completely wrecking it.

Besides being frustrated with my carelessness I was crestfallen at the prospect of replacing an almost new, high end brush the night before the class. To add insult to injury this was not the first time a brush had been damaged by the "coffee cup" (read my carelessness).

The story came up during the first 5 minutes of class, as I asked around to see if anyone had an extra brush I could purchase as Huzzah Hobbies was completely sold out. Alex happened to in the class, had an extra brush I could purchase, and over the course of two days we discussed the prospect of designing and manufacturing a brush rack. The idea was to try and mitigate the frequent ham handed bumping of the bristles and let the brushes rest in a more natural fashion, hence why they rest Horizontally!

And this is the Result! 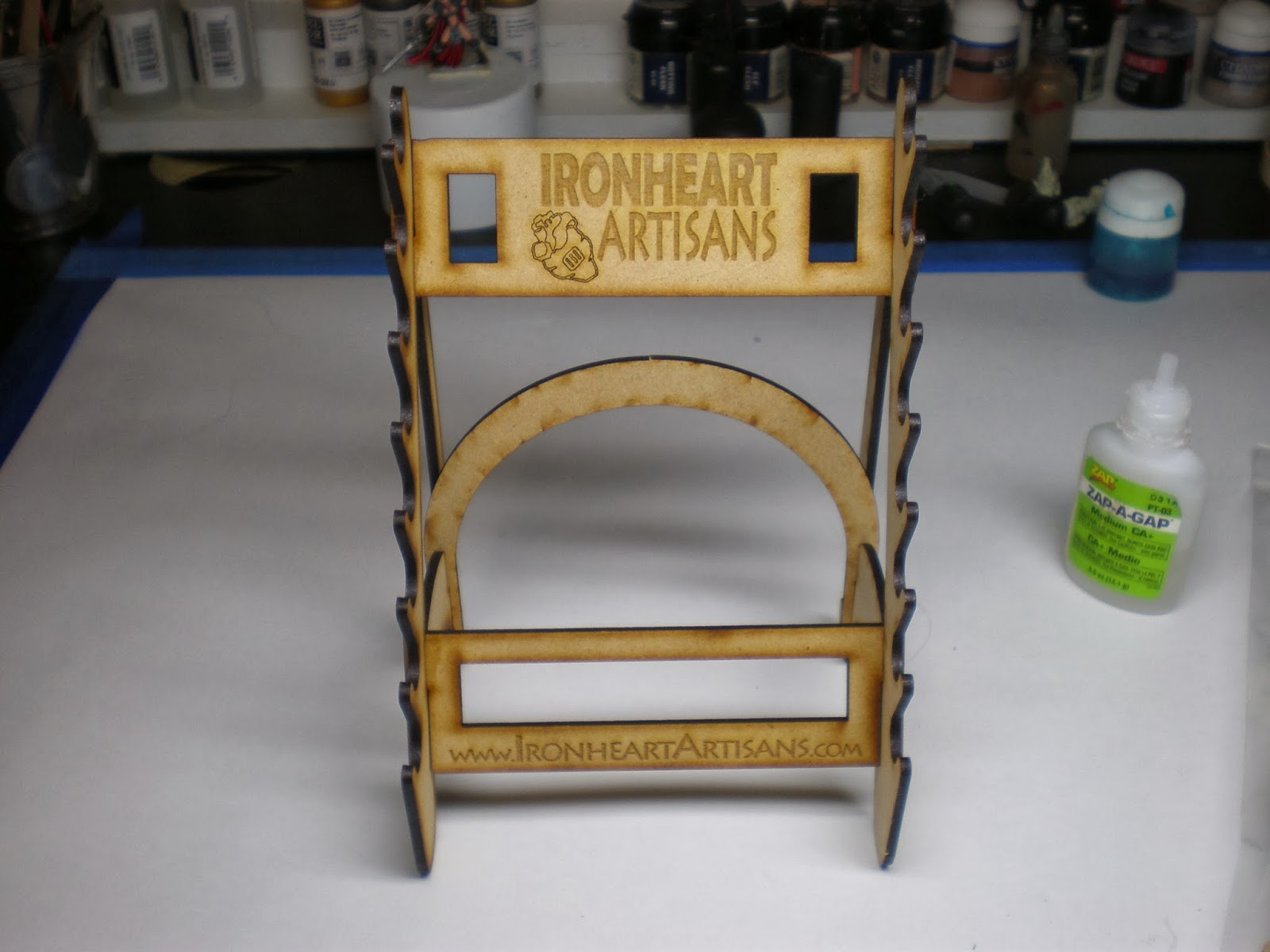 The Brush stand is about 6 inches tall, made of MDF, and comes as pictured in 5 pieces
. 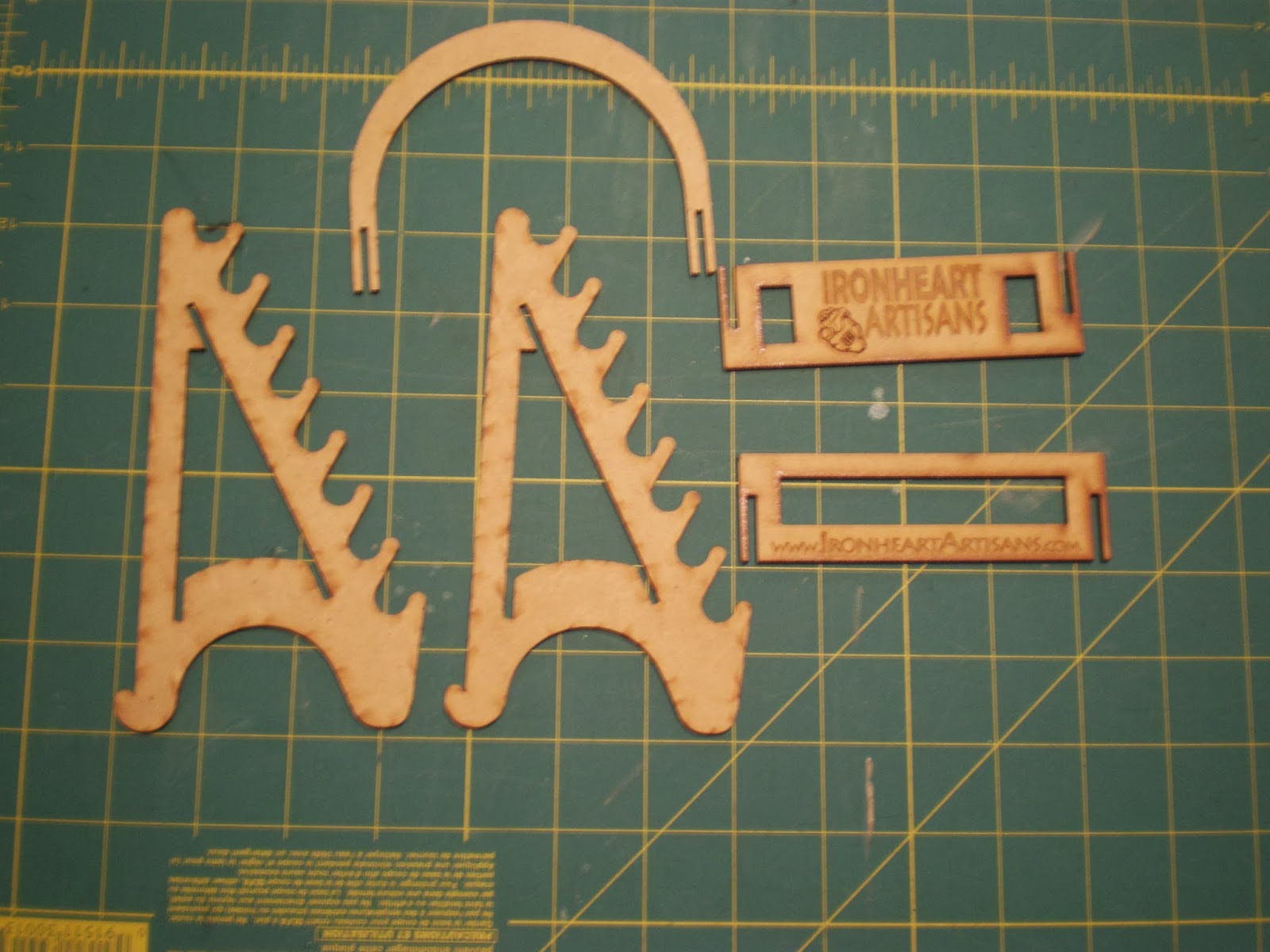 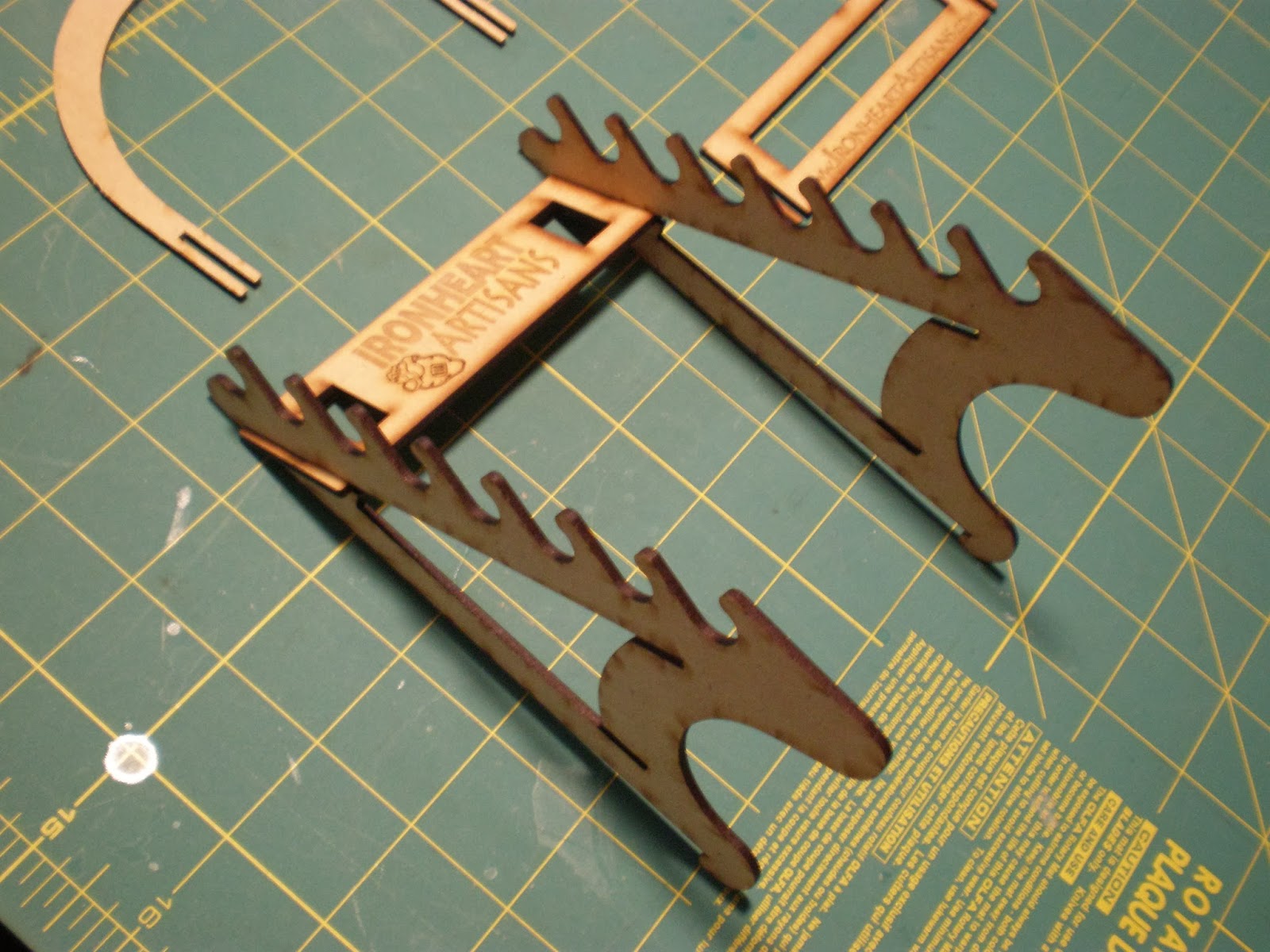 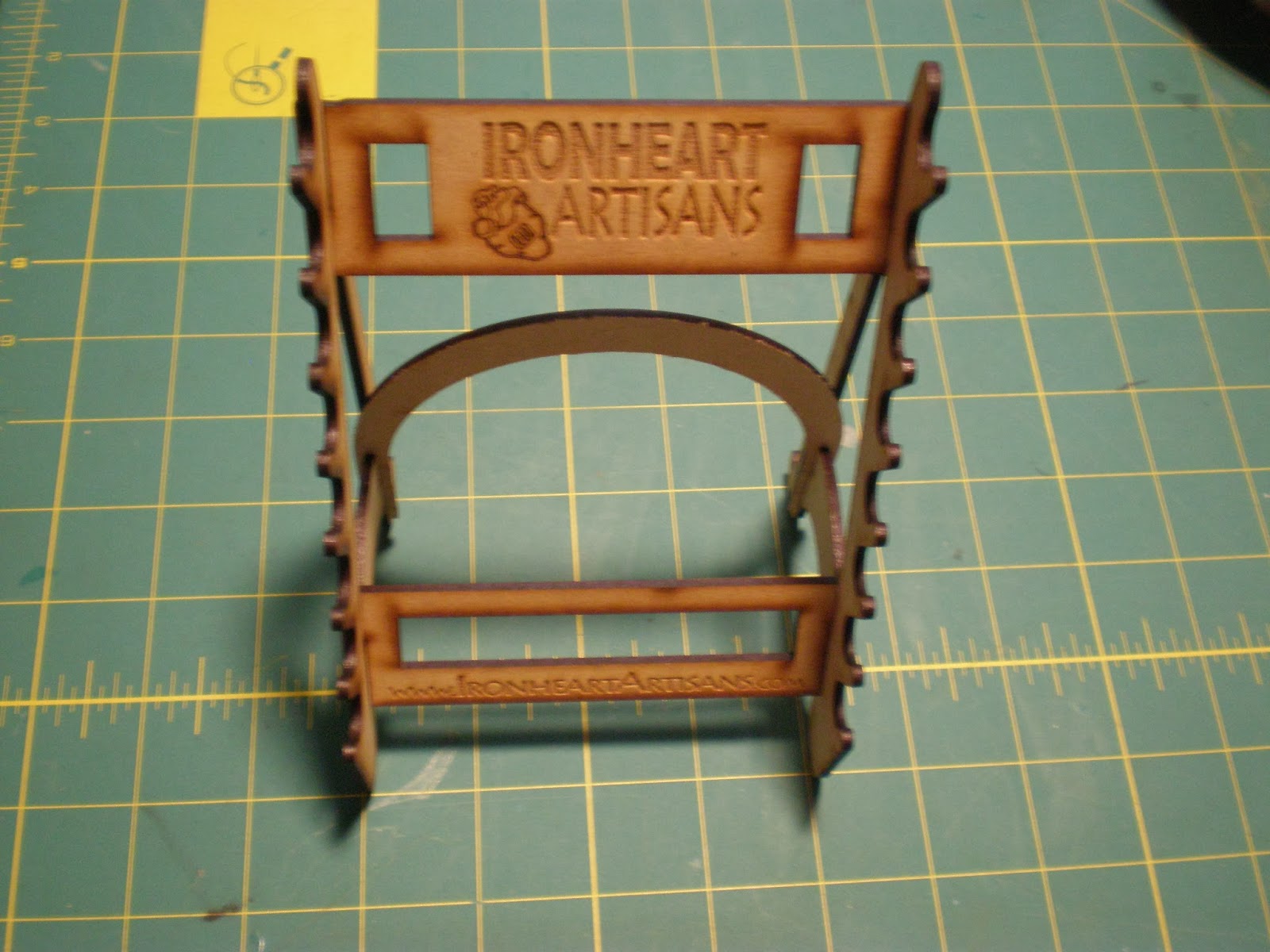 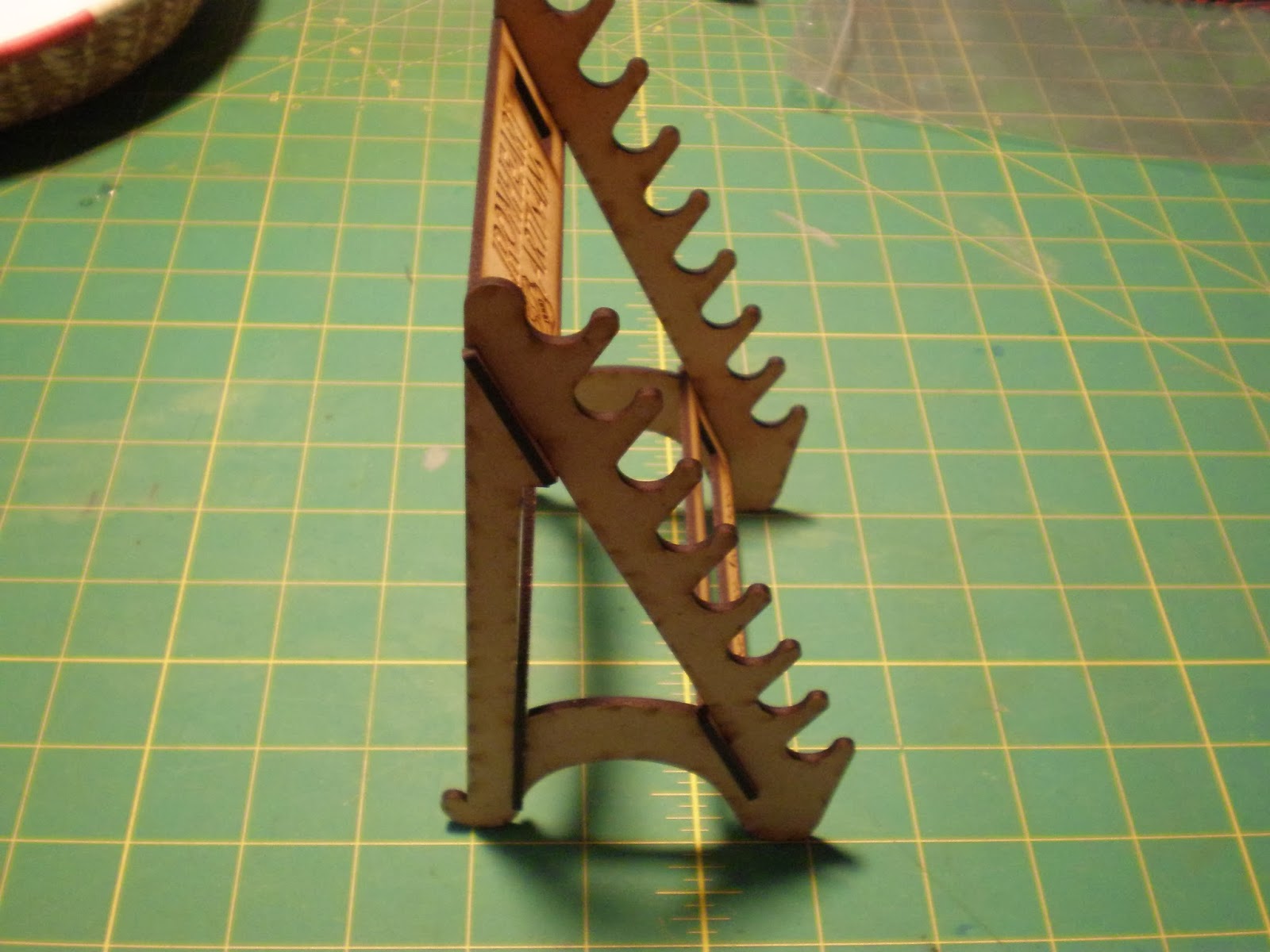 The assembly process was a snap, however it’s important to note it requires a little bit of glue (about 6 spots). I asked about this, and was told it is to avoid the common breakage problem that occurs during the assemble of laser cut MDF kits. Alex avoided this completely by adding extra tolerance to the cuts.


The design has a slight stair-step to allow for easier access to the brushes (see photos below). I really like the fact the spacing of the grooves is far enough apart to allow even ham-fisted Neanderthals like myself to access each group with ease. 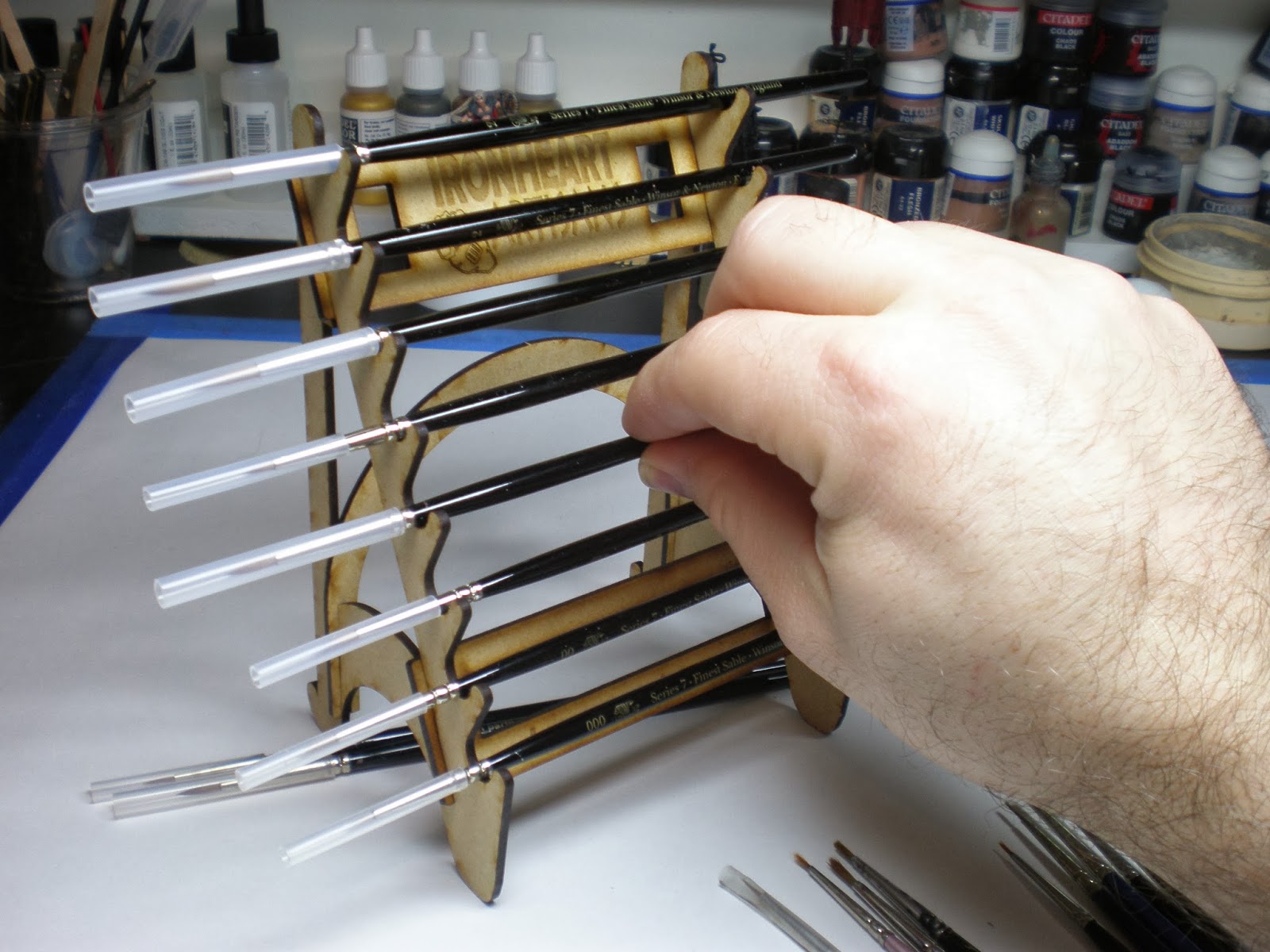 A small unintentional bonus was the depth of the grooves allowed me to stack 2 brushes in each tier This allowed me to sort by size and set of wet blending brushes. You could also use it to keep track of spares, or have groupings based on projects or common usage, etc. It's worth noting I was able to get several different size brush handles on the rack without any problems.
Pros:
Excellent design, good weight, easy assembly, and affordable with a target suggested price of around $10

Cons:
Slight “Burned Wood smell”… I actually like it (and so did a friend I mailed one too), but my wife who shares the office complained until it had aired out a bit.

Overall, I think it’s worth a solid 5 stars, I plan to purchase one more for personal use and give a few away as gifts. They will be available off his website in roughly a week.
Posted by Dameon Green at 4:46 PM

Looking for a "few" things, for current and future conversions..

Happy to trade for or buy.. PM or email.